In addition to insurers, mobility players such as car rental companies face fraud during return of the car. Customers tend to hide damages during car returns which leads to conflicts with end customers. On the other hand, customers often feel cheated when they are overcharged for damaging the car.

Similarly, during buying/selling of used cars, the owner of the car has an incentive to hide damages to inflate the sales value of the car

Traditional method of fraud detection focuses on creating  red flags and business rules based on historical data. Image/video analysis using AI is a relatively new method for fraud detection that has become feasible after the recent major improvements in computer vision technology.

A customer purchasing vehicle insurance policy tends to hide pre-existing vehicle damages during the manual inspection/video-based assessment. This is done to avoid getting rejected, or to make a claim on pre-existing damages after the insurance is issued.

Fraud during a motor insurance claim

During damage assessment, the customer includes damages that existed before the accident (old or prior damages) occurred to claim a higher amount from the insurance company.

Fraud during a car rental drop-off

The customer hides damages done to the car during the rental period to avoid paying the penalty to the rental company.

In some cases, the rental agency exaggerates minor damages that are detected after a rental to draw a heftier fine from the renter, and also receive a higher claim amount from the insurance company.

The seller hides damages during the video/photo-based inspection that is done to assess the car's condition. They do this to falsely inflate the price of the car being auctioned.

While the use-cases listed above are the most common ones, any situation that leads to an inspection or assessment of a vehicle creates potential chances for fraud. Vehicle insurance fraud also includes misrepresenting data on insurance applications, inflating insurance claims, staging accidents to make an insurance claim, faking or lying about the severity of physical injuries or vehicular damage to inflate claim value, falsely reporting a stolen vehicle, etc. Fortunately, AI delivers a solution.

The introduction of modern technology like Artificial Intelligence and the digitalization of fraud detection processes is a giant step forward in preventing auto inspection fraud.

Inspektlabs, for example, has been helping insurance and mobility companies detect and prevent motor insurance fraud with an AI-enabled platform. The platform delivers multiple features such as video-based auto damage detection, detection of old or prior damages, identifying damage cover-ups with stickers, fraud detection through metadata, etc.

While the following modules are specific to Inspektlabs, this is how AI can help detect and prevent car inspection fraud:

During a video inspection, the camera feed from the web app is directly transmitted to the platform in real-time, where the AI system assesses car damages. This method prevents any tampering of photos or videos by the user. Traditional inspection apps save the assessed photos and videos on a local system, which is susceptible to tampering. For example, customers can edit the videos or images to hide damaged parts. Inspektlabs' video-based auto damage detection system transmits the phone camera feed directly to the backend platform preventing any middleman tampering.

Identification of damages that should be included in the current claim is important to correctly determine repair estimates. Including damages from prior accidents inflates the claim amount, which customers sometimes take advantage of. Some common methods of fraud are:

It's evident that the value of the claim is greatly influenced by the number of damaged parts and the severity of the damages. This is why having the tools to differentiate between old and new damages is important.

Inspektlabs' AI-based auto damage inspection solution can automatically differentiate between old and new damages. It also has the capability to differentiate between single-point and multi-point damages to generate an accurate assessment report. The AI platform uses smart accidental damage pattern analysis to rule out damages that are not associated with the accident being assessed.

3. Ensure all Parts are Covered and Inspected

A key activity in the inspection process is capturing each zone of the vehicle on video or photo along with the necessary documents, chassis number, and an odometer reading.

An AI-enabled web-based solution like Inspektlabs, on the other hand, ensures all zones are captured during a video inspection by guiding the user in real-time as they use the device to capture the video. This ensures no zone is mistakenly or deliberately missed.

It also checks to ensure the assessment video is not blurred and is shot in good lighting conditions to avoid ambiguity in future reviews.

4. Determine the Cause of Damage

Knowing the cause of damage is not just required for settling a claim, it is also an important factor in defining the severity of the damage. Without knowing the exact cause of the damage, the insurer cannot determine if the damage was indeed caused because of the accident or falsely exaggerated later. The cause is generally deduced from visual cues like the damage pattern. A car having very close and minor dents along with a broken front and/or back windshield was probably hit by a hail storm.

A car that crashed into a pole will have its front bumper folded inwards around the pole, and the bonnet will be severely damaged.

When a car hits a person, the damage to the front bumper is not very evident, but the hood takes damage, and there are chances of the windshield cracking.

Some damages are minor spot damages and isolated, for example, if a stone or small rock damages the car.

By analyzing visual cues in the captured 360-degree video, the AI software is able to determine the cause and severity of the damage.

Since vehicle insurance companies also cover physical injuries and death, determining the magnitude of the accident is important because it helps corroborate the severity of the injuries.

Analyzing damage patterns also helps eliminate any false claims by correlating the damaged area to the injured area. For example, if the car has dents only on the passenger side but the driver claims they have received surface-level injuries during the accident, they are probably lying to claim a higher insurance amount.

While still in the development stage, Inspektlabs' AI can use the analyzed image patterns to predict the probability and severity of physical injuries in the car damage assessment report.

An AI-based video recording assessment is more accurate than a manual or photo-based inspection. It reduces the chances of fraud to a much greater extent by capturing a more comprehensive view of the vehicle. Some advantages of using Inspektlabs' 360-degree video recording solution for damage assessment:

Switching cars in between a photo or video inspection is a common method of hiding damages. A person who intends to hide existing damages in the car being assessed will switch cars when shooting the section of the car that is damaged. In case of a video, the person will cover the camera with a finger or pause recording and move over to another car.

Inspektlabs' AI-based video inspection completely prevents this from happening. The video is transmitted to the backend AI system in real-time, as it is being shot so the user cannot pause or tamper with it. The AI also detects any discrepancies in the video, like sudden movements that blur the image or if the camera is covered with a finger, and flags this as an anomaly.

Videos carry embedded metadata like GPS coordinates, timestamps, media encoder data, etc., that cannot be tampered with. Even if the original video is somehow corrupted, the metadata can be analyzed to get valuable information that will flag a tampered video.

In traditional vehicle damage assessment processes, the metadata of the car inspection video is not checked, and edited videos can slip through as genuine assessments.

However, with an AI solution, a tampered video can't go unnoticed because the AI analyzes the video's metadata to detect any anomalies that could point to video tampering. For example, if the GPS location in the video's metadata and the car's location are not the same, it indicates the user sent a fake or tampered video. If there are multiple timestamps with breaks in between, it indicates the video has been clipped. An AI damage assessment solution can detect and deduce these anomalies.

The VIN and registration number are unique for a vehicle and are good indicators of authenticity during an assessment. An agent or user recording an inspection video is required to also include the VIN and license plate in the shot to prove the correct car is being inspected.

However, since videos can be tampered with, a video that is shot by the user or an agent on their phones cannot be trusted even if it has the VIN and license plate in the shot.

An AI-based car damage assessment platform solves this problem. Since the video is transmitted to the platform in real-time, the user cannot doctor the video. The agent or user is required to show the VIN and license plate at the start of the video, and it can then be assumed that the rest of the video is legitimate.

The AI solution also uses OCR to read text from the license plate, VIN, documents, and odometer and then matches it to the documents on file.

Pasting stickers to cover damages is a common method of defrauding an insurance or car rental company. People either cover damages completely or add stickers that make it difficult for an auto damage detection tool to detect damages.

On the flip side, people making claims sometimes add stickers that simulate damages, and these get picked up by the auto damage detection tool, thus increasing the claim's value.

Inspektlabs' AI is designed to detect stickers and deduce their purpose on the car - whether for aesthetics or to commit fraud.

The auto insurance and mobility players such as car rental and car auction players deal with a lot of fraud pertaining to car inspections.

However, advancements in technology have made the task of preventing auto inspection fraud easier than it used to be. Companies can now do away with manual processes and legacy technology, which are slow and error-prone, and implement modern AI-based solutions that automate and accelerate the entire inspection process. 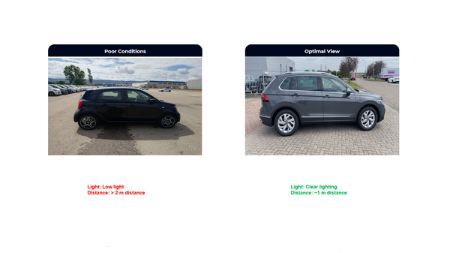 Vehicle inspection automation simplifies car damage detection. Automated car inspections are a blessing because they help you avoid a lot of hassle. If you follow these guiding principles, you can maximize the benefit you can get from AI vehicle damage inspection.

Let us discuss the benefits of removing the background from car images. Also read more about the need and challenges of background removal process.